The aquamarine is a form of the mineral beryl that also includes other gemstones such as the emerald and morganite. Beryl occurs as free six-sided crystals and is a relatively hard gem, ranking after the diamond, sapphire, ruby, alexandrite, and topaz 7.5-8 on the Moh’s scale.

Aquamarine in the rough and Gemme Couture Aquamarine Earrings

Aquamarines vary in color from deep blue to blue-green of different intensities, caused by traces of iron in the beryl crystal. Deep blue stones are the most prized because they are rare and expensive. However, yellow beryl stones can be heated to change them to blue aquamarines.

The best source of aquamarines is Brazil. High quality stones are also found in Colombia, the Ural Mountains of Russia, the island of Malagasy, India and in the United States, Colorado, Maine, and North Carolina are the best sources.

The name aquamarine was derived by the Romans, “aqua,” meaning water, and “mare,” meaning sea, because it looked like sea water. Aquamarines were believed to have originated from the jewel caskets of sirens. They were considered sacred to Neptune, Roman god of the sea. This association with the sea made it the sailors’ gem, promising prosperous and safe voyages, as well as protection against perils of the sea. Its first documented use was by the Greeks between 480-300 BC. They wore aquamarine amulets engraved with Poseidon (the Greek god of the sea) on a chariot. 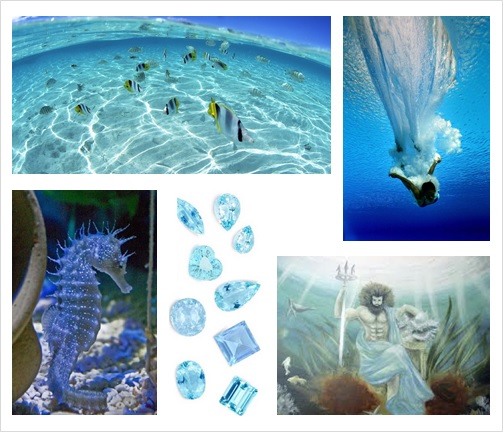 Beginning in the Roman period, the aquamarine was believed to possess medicinal and healing powers, curing ailments of the stomach, liver, jaws, and throat. During the Middle Ages, it was exchanged by newlyweds as rings and was believed to be an effective antidote against poison. Aquamarines were thought to be the source of power for shamans and soothsayers, who called it the “magic mirror,” and used it for telling fortunes and answering questions about the future. It is said that Emperor Nero used it as an eyeglass 2,000 years ago. Much later, aquamarines were used as glasses in Germany to correct shortsightedness. In fact, the German name for eyeglasses today is “brille,” derived from the mineral beryl.

Aquamarine is very useful to obtain self-control and control over your feelings and emotions. Wearing an Aquamarine Gemstone also helps in increasing concentration, mental clarity and is best when used while meditating or studying.

Aquamarine strengthens the spirit of its wearer and exposes deceit. As such, it is not recommended to dishonest people. It also helps to uncover secrets.  Aquamarine acts on its wearer mood, as a peaceful-seascape – it calms the mind.  Greenish Aquamarine is considered as a talisman of gamblers, as it protects them from loss. It is also said to strengthen sex appeal of the wearer.