Isn’t it nice to have a choice? October also has two birthstones; Tourmaline and Opal. Tourmaline is a favorite gemstone for many because it is available in a wide variety of colors. Opal gemstones are truly unique because each individual gem is adorned with a one-of-a-kind color combination. Tourmaline is also one of Gemme Couture’s favorite gemstones, it’s versatility in color inspires  our designs and leads to unique creations.

Available in a spectrum of colors and color combinations, Tourmaline lives up to its name, which means “mixed stone”. With a rainbow of colors, Tourmaline can easily enhance any jewelry collection. Cranberry red, hot magenta, bubblegum pink, peach and orange, canary yellow, mint, grass and forest green, ocean blue, violet: Tourmaline is all of these and more. Tourmaline is also known for displaying several colors in one gemstone. These bi-color or tri-color gems are formed in many combinations and are highly prized. One multi-color variety is known as Watermelon Tourmaline and features green, pink, and white color bands. To resemble its namesake, the gemstone is cut into thin slices having a pink center, white ring, and green edge. Tourmaline is found in many localities including Brazil, Afghanistan, East Africa, and the USA.

Paraiba Tourmaline gemstones have become one of the most precious and valuable gems in the world, even though it was only discovered in the 1980’s. Its rare shades of electric blues and greens are reminiscent of the blue ocean shores of Paraiba, where this gem is mined. These unique, vivid blue and green colors are not found in any other gemstone in the world. The ‘Ethereal Carolina Divine Paraiba’, at 191.87ct the world’s largest cut Paraiba tourmaline, has been set into a one-of-a-kind necklace by Canadian jewellery house Kaufmann de Suisse. Not only extraordinary in size but also flawless in color and optical transparency, the modified brilliant-cut oval-shaped ‘Ethereal Carolina Divine Paraiba’ entered the Guinness World Records in 2009, more than tripling the previous world record for a cut Paraiba tourmaline. This tourmaline is part of the Planetary Collection held by Vincent Boucher, CEO of Billionaire Business Enterprises, Inc, a Canadian financier, physicist and artist.

The name opal derives from the Greek Opallos, meaning “to see a change (of color).” In ancient times, the Opal was known as the Queen of Gems because it encompassed the colors of all other gems. Opals range in color from milky white to black with flashes of yellow, orange, green, red, and blue. An opal’s beauty is the product of contrast between its color play and its background. Each Opal is truly one-of-a-kind; as unique as our fingerprints. With its rainbow of colors, as you turn and move the Opal the color plays and shifts, giving you a gem that can be worn with a plethora of ensembles. Australia’s Lightning Ridge is known for its rare and stunning black Opals. The ideal Opal is one that displays broad patterns covering the surface, with all the colors of the rainbow, including red. Opal is a formation of non-crystalline silica gel that seeped into crevices in the sedimentary strata. Through time and nature’s heating and molding processes, the gel hardened into the form of opals. The opal is composed of particles closely packed in spherical arrangements. When packed together in a regular pattern, a three-dimensional array of spaces are created that give opal its radiance.

According to ancient legend the Opal was considered to be the most mysterious and bewitching of all gemstones, because it was believed to have all the virtues of other precious stones within. Opals were believed to boost the joy of one’s earthly existence. Its meaning symbolizes purity, innocence and hope. The Opal has metaphysical properties of confidence, loyalty, faithfulness and happiness. October babies are known to be lovers of beauty, peace and harmony, making the gemstone Opal a superb gemstone to exemplify the personalities of those born in October. 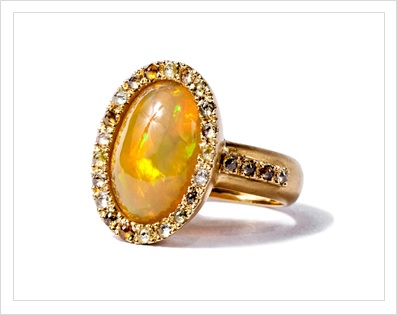