We have already written about the classic yet eternal pearl; but pearls are not the only birthstone of the month of June. All of you June born lovelies can also cherish… moonstones! 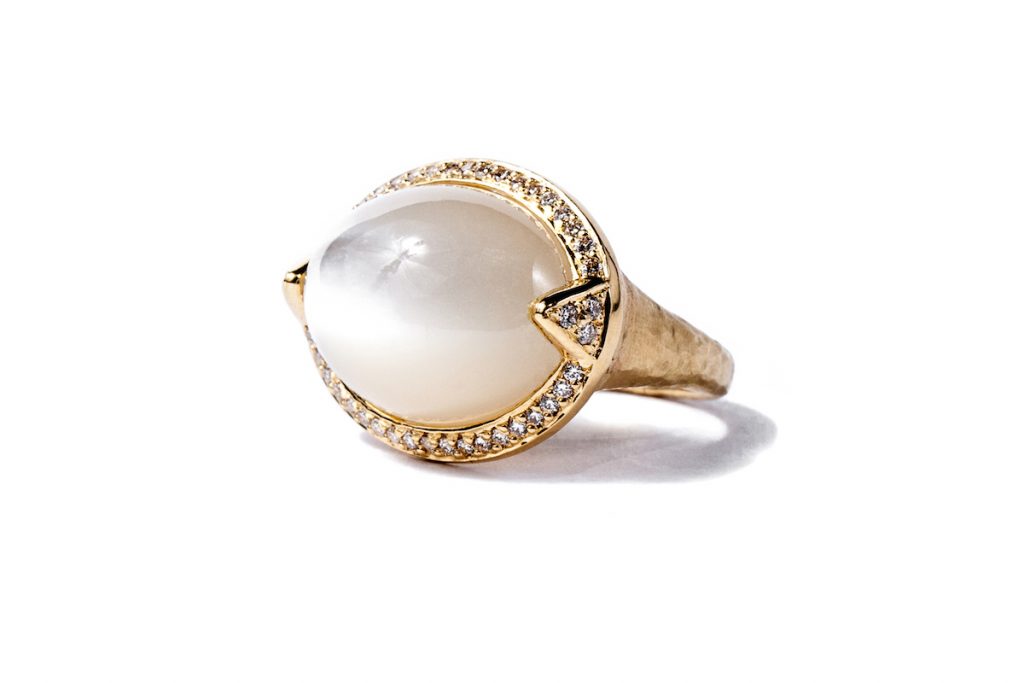 Where can you find moonstone?

The most common moonstone comes from the mineral adularia, named by an early mining site near Mt. Adular, in Switzerland (now it is the town of St. Gotthard). This is how people created the term adularescence. The term refers to the stone’s milky glow, like moonlight floating on water.  An alternative name in geology is hecatolite.

The finest classical moonstones – colorlessly transparent with a blue shimmer – come from Sri Lanka. Since these sources of high-quality blue moonstones have essentially been mined out, prices have risen sharply. 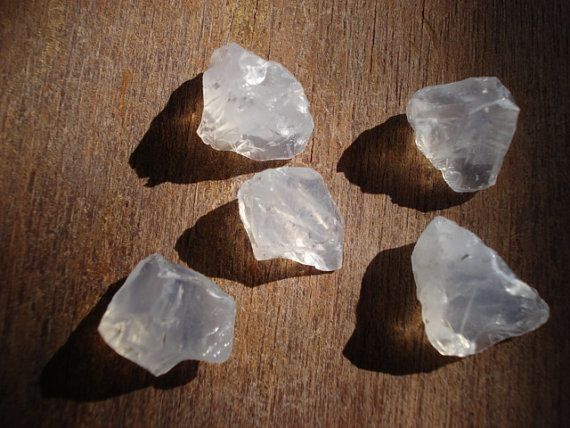 This gemstone belongs to the family of minerals called feldspars, an important group of silicate minerals commonly formed in rocks. About half of the Earth’s crust is composed of feldspar. This mineral occurs in many igneous and metamorphic rocks, and also constitutes a large percentage of soils and marine clays.

Moonstone, one of June’s birthstones, was named by the Roman natural historian Pliny, who wrote that moonstone’s shimmery appearance shifted with the phases of the moon. 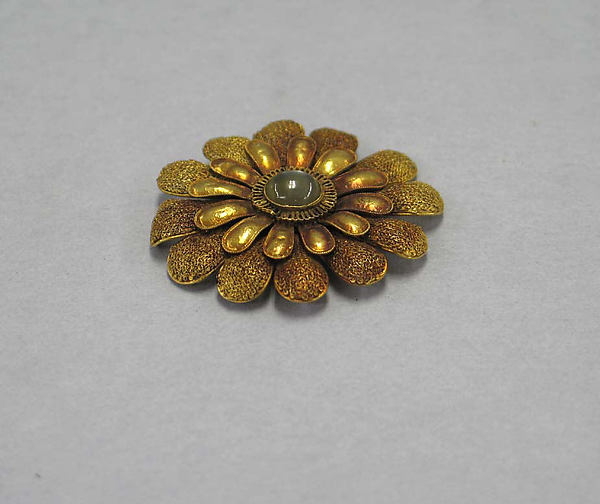 Moonstones are believed to be named for the bluish white spots within them. When moonstone is held up to light it projects a silvery play of color. Very much like moonlight. 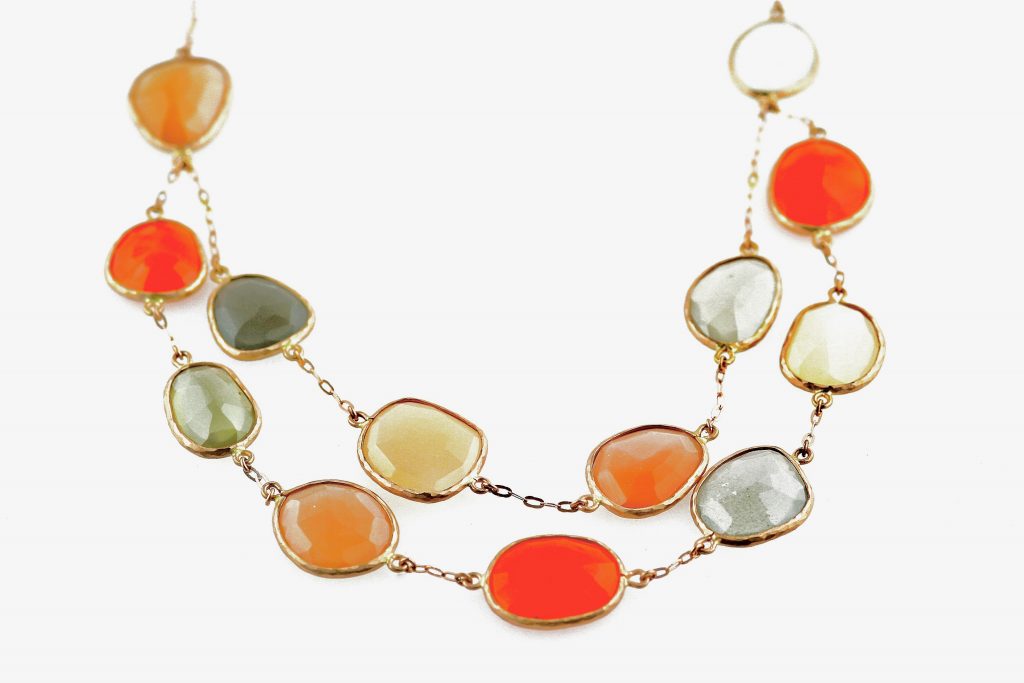 When the stone is moved back and forth, the brilliant silvery rays appear to move about, like moonbeams playing over water.

Color of the moonstone

This beautiful gemstone’s weakness is its relatively low hardness of 6 on the Mohs scale, making it prone to stress cracking and cleaving. Care is required with moonstone jewelry, especially with bracelets; so pendants are preferred. 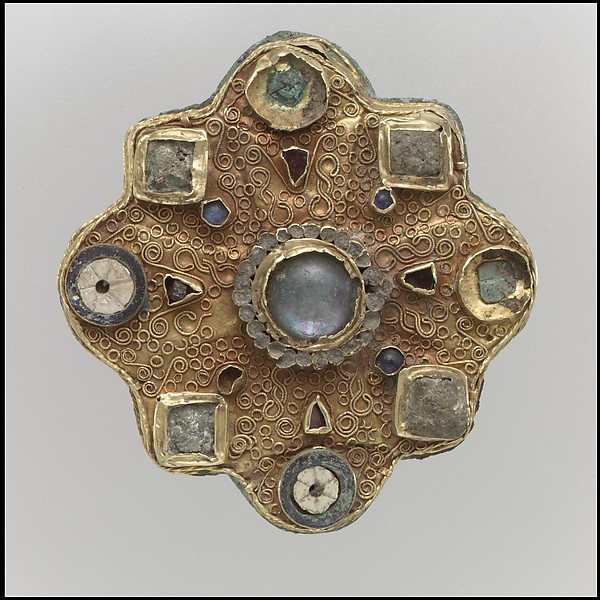 Moonstone is composed of two feldspar species, orthoclase and albite, and they are intermingled. Then, as the newly formed mineral cools, these two separate into stacked, alternating layers.

When light falls between these thin, flat layers, it scatters in many directions producing the phenomenon called adularescence. This billowy effect makes magic of color of the moonstone. 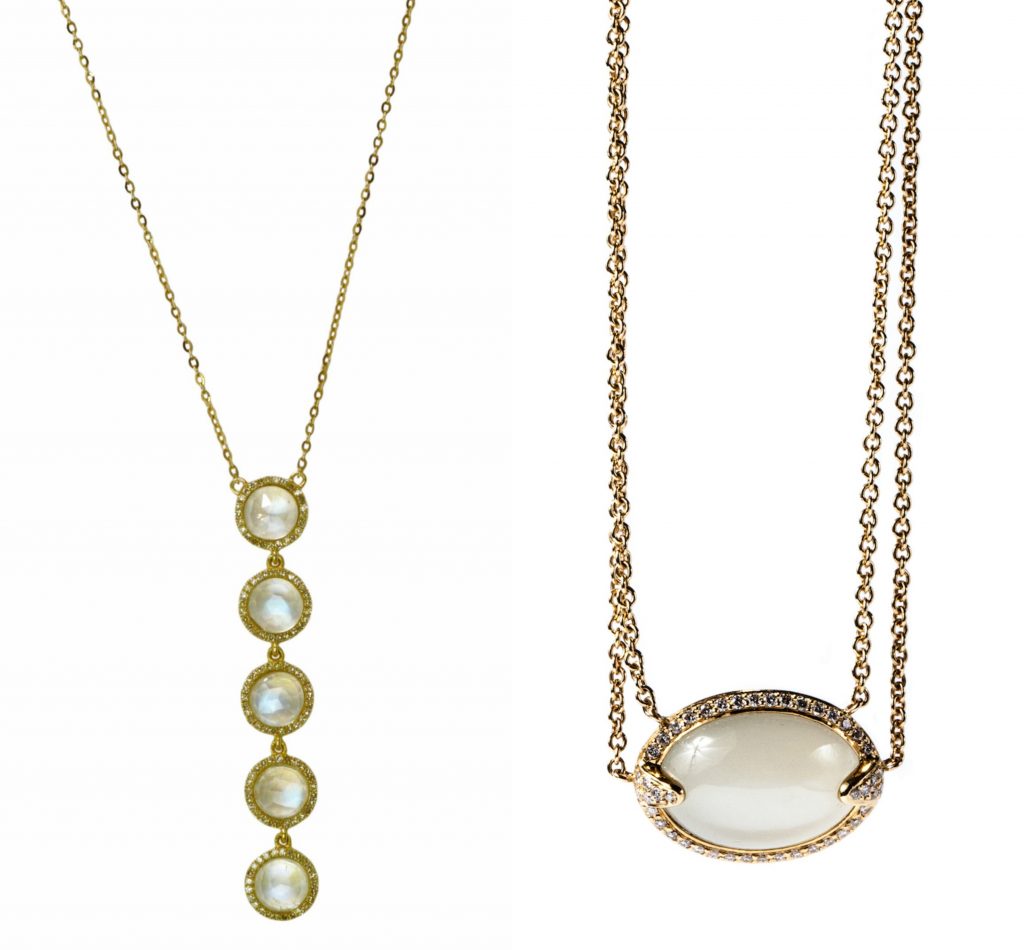 As oppose to famous Sri Lanka’s bluish, Indian moonstones are brown, green or orange in color. These are more abundant and affordably priced than their classical blue counterparts.

As its name implies, moonstone is closely associated with lunar mystery and magic. Its calming, balancing energies can supposedly attune to natural biological rhythms.

Moonstone acts as the ultimate fertility crystal by sparkling passion in new lovers and reuniting old ones. Moonstone is also known as the Traveler’s Stone. It is believed to protect travelers at night.

Since ancient times, many cultures have held that moonstone can attune its wearer to the natural rhythms of the moon. Known for its calming, soothing aura, moonstone has been used to treat insomnia and sleepwalking, ward off nightmares and provide vivid dreams.

Moonstone is often associated with love, passion, and fertility. It is a crystal to nurture new love and rekindle old flames. 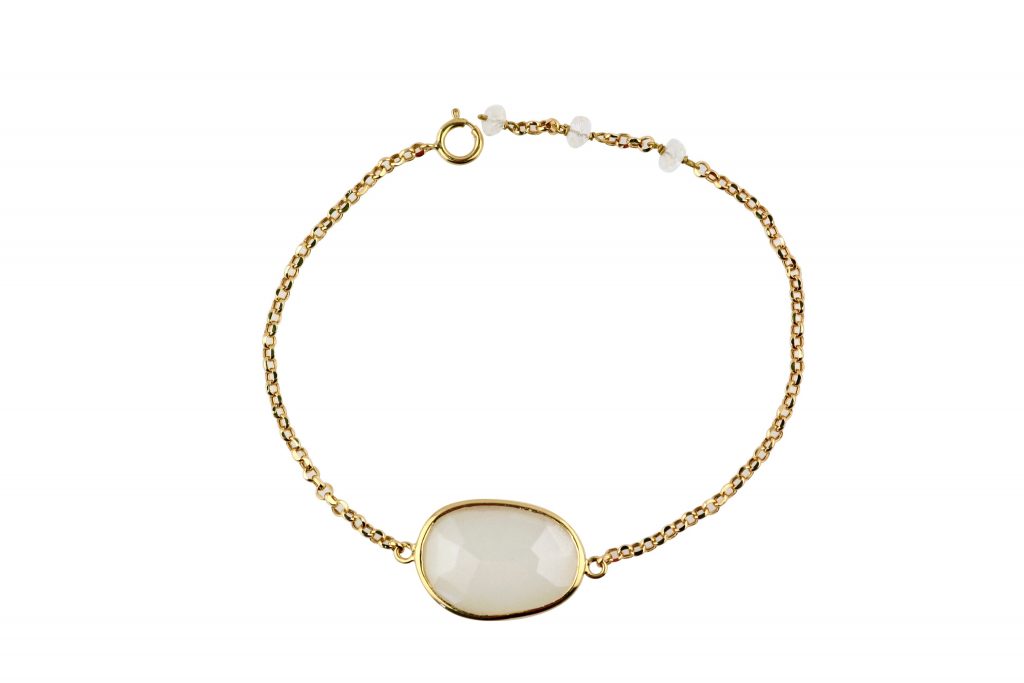 The ancient Romans also believed that the image of Diana, goddess of the moon, was enclosed within the stone. Moonstones were believed to have the power to bring victory, health, and wisdom to those who wore it. 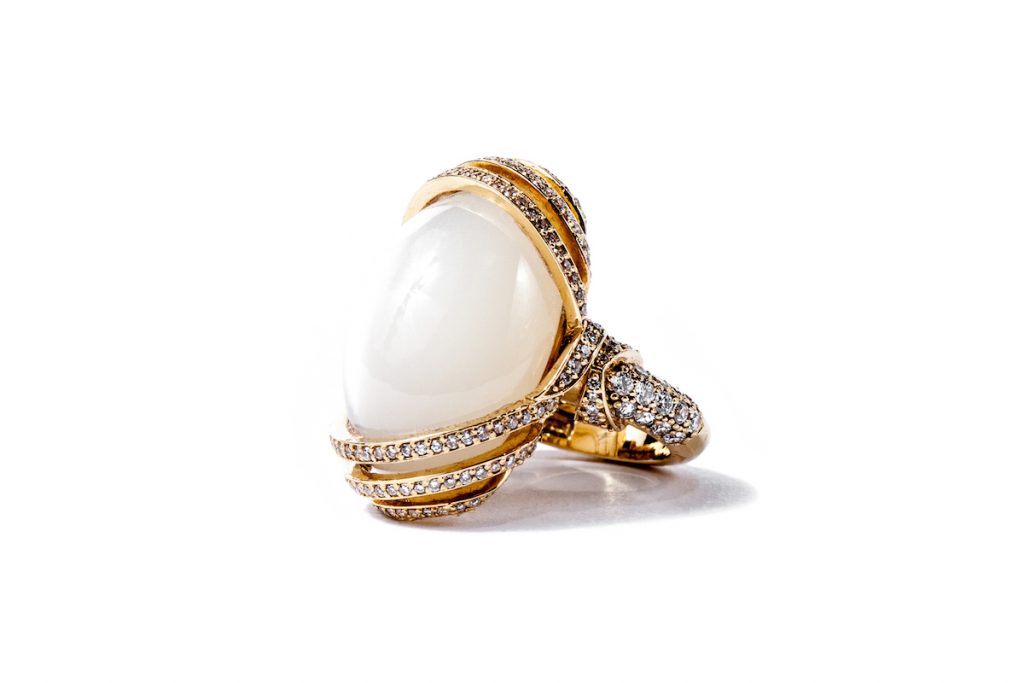 It is believed to balance the yin and yang and is said to protect women and children. In early times, it was believed that one could see the future if the stone was held in the mouth during a full moon.

According to one legend, moonstone will ensure abundant crops. 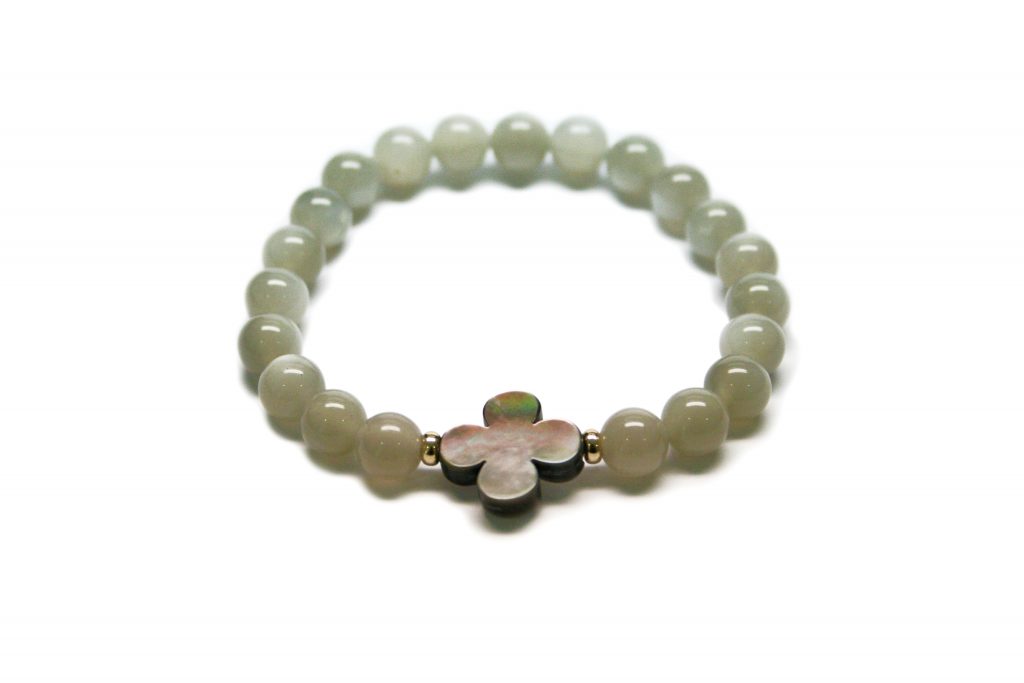 Moonstone’s healing properties are said to promote digestion, to protect against epilepsy, to calm emotions, cure headaches and nose bleeds, and protect against sun stroke.

Moonstone has been used as a beautiful adornment and a powerful talisman since ancient civilizations. The Romans admired it, believing it was formed from moonbeams. Both the Romans and the Greeks associated moonstone with their lunar deities.

Hindu mythology also told that moonstone was made from the moon’s ethereal light. 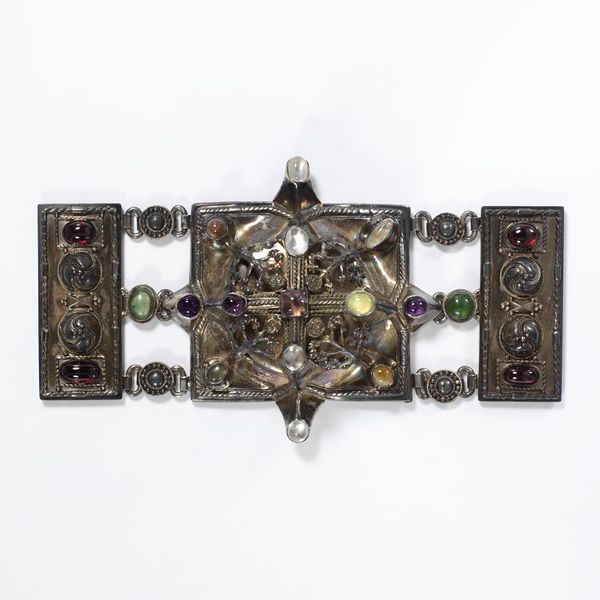 In more recent history, the moonstone became popular during the Art Nouveau (1890 – 1910) period; French goldsmith René Lalique and many others created a large quantity of jewelry using this stone.

Valued for centuries, moonstone is still popular and accessible today. In parts of the world like Germany and Scandinavia, moonstone is the preferred June birthstone, over pearl and alexandrite,.

United States astronauts Neil Armstrong and Edwin (“Buzz”) Aldrin landed on the moon on July 20, 1969, aboard the Apollo 11 spacecraft. Since this and all other astronaut-controlled spaceflights had been launched from the Kennedy Space Center in Brevard County, the Florida legislature sought to memorialize this “giant step” for humankind. In 1970, lawmakers adopted the moonstone as the official state gem. 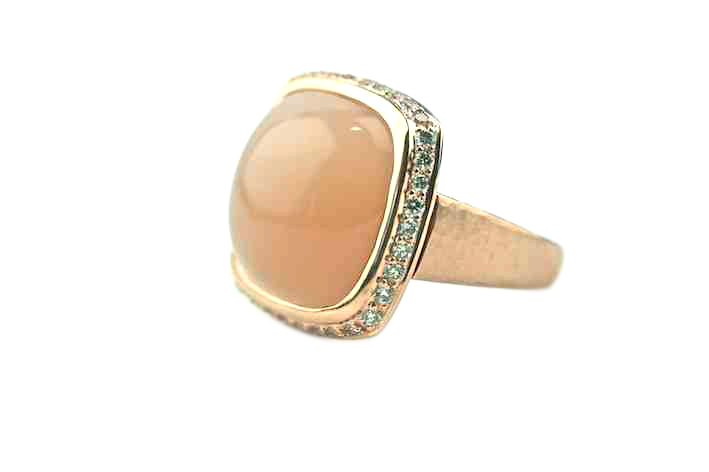 Ironically, you can’t find the moonstone naturally in Florida… nor on the moon!

But, even if you are not from Florida, you can still find your perfect moonstone jewelry. Just contact us!

The most famous rubies and ruby jewelry