June birthstone – Alexandrite, a stone of a remarkably good omen

June is one of the only two months that has three birthstones associated with it, giving the lucky people born in June a choice of gemstones between pearl, alexandrite, and moonstone. We have already written about the classic yet eternal pearl and mysterious and magical moonstone.

Now, the time has come for a unique and precious alexandrite. Besides being one of the June’s birthstones, alexandrite is also the gem for the 55th wedding anniversary.

In 1912 alexandrite is included as a birthstone on the American National Association of the Jewelers list.

The alexandrite stone is an exceptionally rare color-changing variety of chrysoberyl. This unique gemstone is renowned for its rare ability to change color in different light, which is a result of the complex way the mineral absorbs light. It dramatically changes from a bright green shade in daylight to a cherry-red color under candlelight, so is often described by gem aficionados as “emerald by day, ruby by night.” 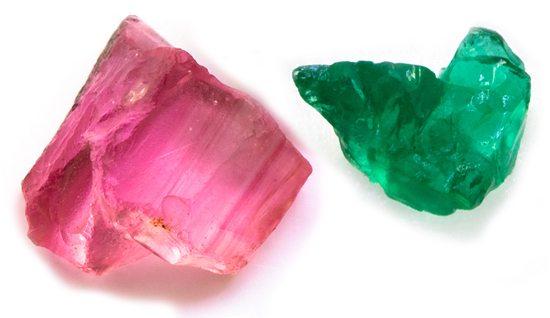 Color-changing alexandrite. Green in sunlight, red in the lamplight.

Alexandrite is an exceptionally rare and valuable stone, originally discovered in Russia’s Ural Mountains in the 1830s, but now can be found in Sri Lanka, East Africa, and Brazil. Due to it being second in hardness to only diamonds, sapphire and ruby, and its unique color, Alexandrite jewelry is extremely popular.

Abundant alexandrite deposits were first discovered in 1830 in Russia’s Ural Mountains. Those first alexandrites were of extremely outstanding quality and displayed vivid hues and dramatic color change. The gem was named after the young Alexander II, heir apparent to the throne. It caught the country’s attention because its red and green tones mirrored the national military colors of imperial Russia.

A natural alexandrite from the Ural Mountains of Russia. On the left, it shows a dark crimson tone in the evening, under incandescent light, on the right, it displays a pale green color in the daylight.

According to a widely popular but controversial story, alexandrite was discovered by Nordenskiöld, (1792-1865), a renowned Finnish mineralogist. On the Tsarevich Alexander’s sixteenth birthday on April 17, 1834, and named Alexandrite in honor of the future Tsar — Alexander II of Russia. Although it was Nordenskiöld who discovered alexandrite, he could not possibly have discovered and named it on Alexander’s birthday. 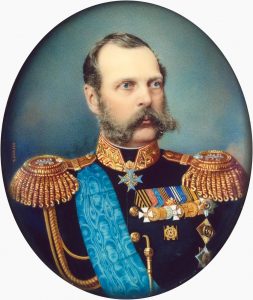 Nordenskiöld’s initial discovery occurred as a result of an examination of a newly found mineral sample he had received from Count Lev Alekseevich Perovskii (1792–1856), which he identified it as emerald at first. Confused with the high hardness, Nordenskiöld decided to continue his examinations. Later that evening, while looking at the specimen under candlelight, he was surprised to see that the color of the stone had changed to raspberry-red instead of green. Later, he confirmed the discovery of a new variety of chrysoberyl and suggested the name “diaphanite”(from the Greek “di” two and “aphanes”, unseen or “phan”, to appear, or show). Perovskii, however, had his own plans and used the rare specimen to ingratiate himself with the Imperial family by presenting it to the future Tsar and naming the stone Alexandrite in his honor on April 17, 1834, but it wasn’t until 1842 that the description of the color changing chrysoberyl was published for the first time under the name of alexandrite.

NilsGustaf Nordenskiöld, the discoverer of alexandrite

After Alexander´s death, Alexandrite became especially popular amongst monarchists. They wore rings with it, quite often with a diamond on each side, symbolizing the two main acts of Alexander II: the cancellation of serfdom and the new judicial administration.

The World’s largest faceted Alexandrite is the Smithsonian Alexandrite. It was unearthed in Sri Lanka and holds a cushion mixed cut. Typical of most alexandrite, the Smithsonian jewel is red and green in color and weighs 65.08 carats. It is currently one of the rarest, and most valuable, jewels in the world. 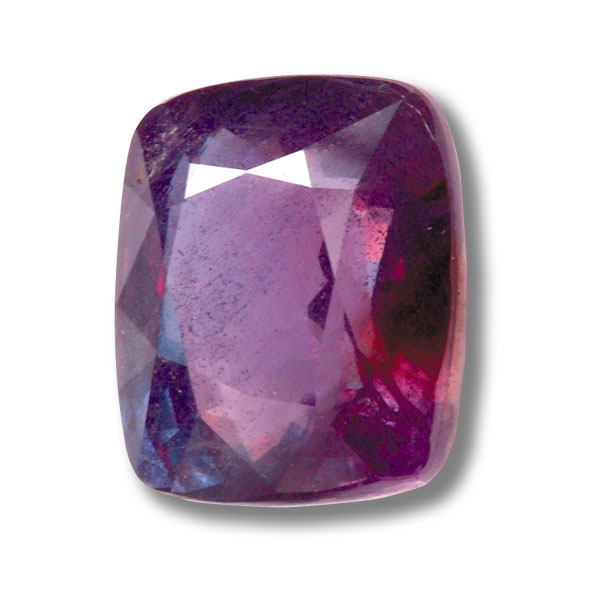 There is a range of myths and opinions regarding what the true alexandrite meaning is and what it can bring to the wearer. This gemstone doesn’t share the ancient history and lore of most other stones, because of the fact that Alexandrite was only discovered in the 19th century.

Since it was first found Alexandrite meaning has been linked to good luck, a vast fortune, and love in addition to aiding creativity and inspiring the imagination. It is frequently used as a talisman, healing stone or just as jewelry. Symbolizing confidence and self-esteem, the gemstone provides its wearer a positive belief boost and optimistic feeling. That is why many people also use this stone as a protective charm.

Considered by many as a stone of the remarkably good omen, cultures all over the world have developed various beliefs and views on alexandrite meaning. We will explore a few of them.

Alexandrite meaning is believed to remind us of our purpose in life and our origin; it provides hope to those who are in despair about their lives. Alexandrite provides a source of strength and constantly them of the light, and with its changing color, it is a reminder that is not what may seem to be.

Alexandrite is a gem for experts, enthusiasts and connoisseurs, a true understatement stone. Its uniqueness and high value are not evident at first sight. The mysterious color change will exclusively occur on exposure to various light sources. It is meant to strengthen the wearer’s intuition and therefore encourages him, or her to discover alternative ways forward in situations where logic will not provide an answer. Alexandrite is also reputed to aid creativity and inspire the imagination.

With a hardness of 8.5, alexandrite makes an extremely durable stone suitable for any jewelry setting. Nevertheless, take care when faceting the stone. Alexandrite is still sensitive to knocks and intense heat. These gems have no special care demands. You can cleanse them mechanically, per the instructions of the system used. Of course, you can also wash them with heated, soapy water and a brush. Don’t store your jewelry items in pile or a tangle in a drawer. Alexandrite and other gemstones can scratch each other and also damage the finish on the metal work. So, store every jewelry item separately in its own individual bag or compartment.

The mining of alexandrite in Russia lasted less than 100 years from the time it was discovered in 1833 to the early 1900s.

The Brazilian mine no longer produces large gemstones, making the gems over two carats extremely rare.

From a historical perspective, it is clear that Russian are the most valuable of all the alexandrites if their origin can indeed be proved. In terms of quality, however, Brazilian gems may be better. With better clarity and a powerful color shift from intense blue-green to dominant purple-red, the beautiful tone change of the Brazilian alexandrites is highly prized. These gemstones are repeatedly in demand.

Gems from India and Sri Lanka are not typically of superb quality, although a small percentage of stones can be exceptionally nice. 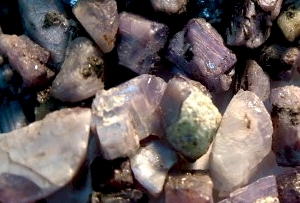 Alexandrite prices continue to climb exponentially because of the limited supply of this rare stone. Along with diamonds rubies, and emeralds, top quality alexandrites are among the most expensive gemstones in the world. 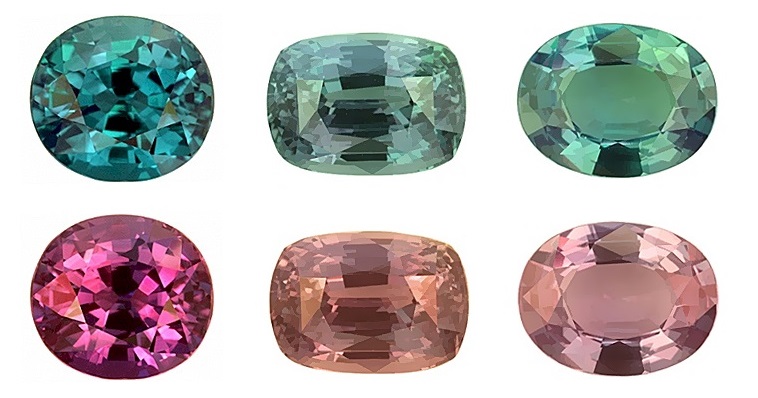 The ideal alexandrite is one with a medium tone and intense or near vivid colors; blue-green in daylight to vivid ruby red or purple-red under incandescent or candlelight. Alexandrites in which one can observe the two colors at the same time may be less desirable. But since light sources are often mixed anyway, the phenomena are reasonably common. Grayish and brownish tones are common in many Alexandrites and these stones are considered to be less valuable. A fine stone displays a distinct and dramatic tone change where both colors are bright and attractive.

When buying alexandrite jewelry, the buyer should inevitably ask for a Certificate of Authenticity or a Gemstone Identification report from a reputed Gem Laboratory. Most reputable stores selling alexandrite will supply a certificate. The tone transformation continues to be the most significant factor in determining the quality and value of an alexandrite. Although other gemstones like garnet, sapphire, and spinel may also transform color as a function of the light source, alexandrite is the well-known, significant and valued of all the color changing stones.

But if you really get involved in alexandrite, you will be utterly fascinated by this gem. It is possible that you will also feel some of the mysterious magic and lore ascribed to it. It is considered a stone of the extremely good omen.

YOU ARE MY FAVOURITE THOUGHT | A BEAUTIFUL, BOTANICAL AND RAW STYLED SHOOT – by Lace in the Desert